Are Madonna, Emily Ratajkowski and Shay Mitchell celebrating their coming out with this new TikTok trend? 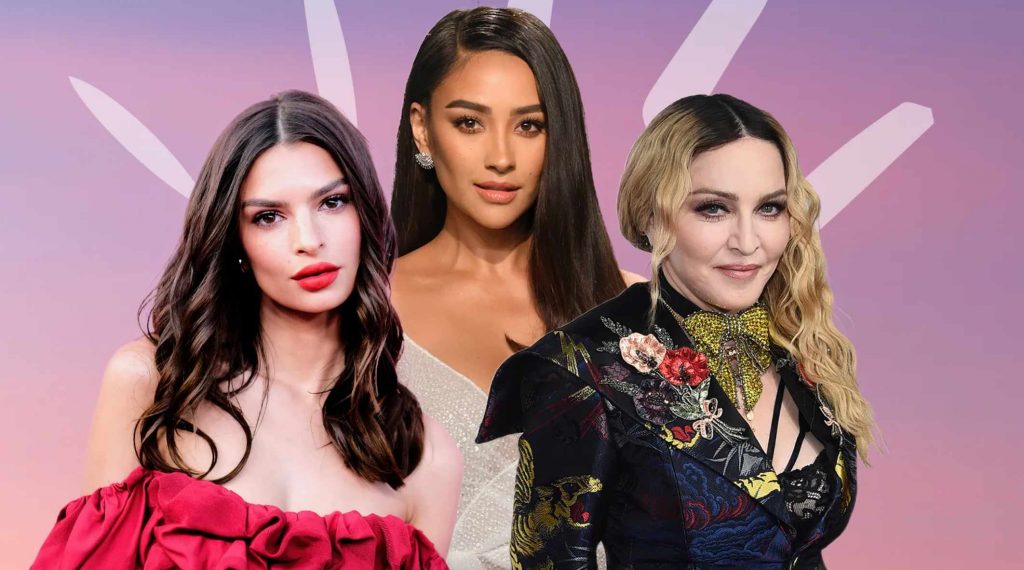 Since the beginning of October 2022, we have seen more and more stars - for example Madonna, Emily Ratajkowski and Shay Mitchell - showing their green couch or throwing their underwear on social media. But what does this have to do with Coming Out Day?

TikTok trends come and go - but this trend has nothing to do with a delicious pasta or a new dance step. This time it's about something much more personal: one's own sexuality. The particular TikTok trend that Emily Ratajkowski and Shay Mitchell's videos are about comes from Tisha, a nutritionist who shares her content on TikTok. Her videos are mostly about hormonal nutrition advice, but she doesn't hide the fact that she's queer and bases some of her content around that. One of her recent videos is themed "Do all bisexuals have this!?" She first looks at the camera and asks the viewer:s, "If you identify as bisexual, do you have a green velvet couch?" Then she turns around and shows her green velvet couch.

The video received a lot of appreciation from her fans on TikTok, who themselves felt addressed, find a kind of solidarity in it and enthusiastically show off their own green couches. Others film themselves sitting on their green velvet couch in disgust, sarcastically saying, "Nothing in my life is original." It seems there are a lot of bisexual people out there who have a green velvet couch.

Apparently, this trend didn't pass the stars by. Even Shay Mitchell, our all "Pretty Little Liars" crush, takes the video of Tisha filming herself on her green velvet couch without saying anything. Fans are surprised, but write mostly positive messages in the comments supporting her and welcoming her to the community. Fans of the "Pretty Little Liars" series are particularly pleased, as Shay Mitchell plays the character Emily in the series, who identifies as a lesbian but is reluctant to be open about it at first. Especially young fans who have followed the series since 2010 and have seen themselves in Emily are happy about Shay Mitchell's playful openness.

This is not the first time Shay Mitchell has spoken out about her sexuality. Back in 2021, she spoke about being attracted to women. And since she's been in the public eye, she always stressed that she wouldn't want to put a name to her sexuality because she wouldn't see the reason for it. I wonder if that has changed now. Either way, she gets support from all sides.

Model, activist and author Emily Ratajkowski is also responding to the trend with her own video. On TikTok, she first shows the video of Tisha and Shay Mitchell before sitting down on her green velvet couch herself with a little grin. In the first hour, the video was viewed 69k times and had over 600 comments. Although there is a lot of negativity on the internet, fortunately the comments were mostly positive and supportive. Many saw it as a big win for the community. Emily Ratajkowski has spoken out strongly as a feminist in the past, using her reach on Instagram and TikTok to educate about feminism and sexual liberation.

Madonna has been celebrated as an icon in the queer community for years for her activism and contribution to pop culture. In the past, however, she has been understood more as an ally, rather than a direct part of the LGBTQ+ community. Now, however, she posted a video on TikTok that might raise questions. In her giant bathroom, she holds a pair of pink pants and writes in the picture, "If I don't hit, I'm Gay!". Then, with little momentum, she throws the pants towards a bin and misses. Finally, she looks into the camera once more and strikes a pose.

However, until now, none of the videos had such an obvious message as this one. The rumours about Madonna's sexuality have never been confirmed by her in such detail. In a 1995 interview with "VH1", she explained that she thinks all people have a bisexual nature - but she did not identify herself more precisely.

This is what's behind the TikTok trend of unusual coming out

The new TikTok trend, in which Madonna, Emily Ratajkowski and Shay Mitchell also participate, is about more than just a new dance move. For example, in a TikTok video, you present a piece of furniture or a character trait that you have and then say that other people who identify with the same sexuality surely have corresponding/s furniture or trait. Other TikTok accounts can then use this video, film themselves and confirm that the statement is true.

Basically, the TikTok trend has nothing to do with coming out. It is more about showing solidarity with each other in a funny way. And that is by adopting stereotypes and making fun of them in the same breath. These are mainly stereotypes that you haven't heard of before - and of course they don't have to be true. You might know the old discriminatory stereotypes that queer people can't drive, can't do math, and have a left-right bias. But have you ever thought that all bisexual people might have a green velvet couch? Apparently, there still seems to be some truth to it.

Of course, a video on TikTok doesn't have to confirm someone's identity, and basically no one has to feel like they belong to a certain sexuality and share that with the world - it may have just been a TikTok joke.

But queer people all over the world benefit from such a playfully open approach to sexuality. Through the lightness of the TikTok trend, they create a positive environment for people who don't dare to openly announce their sexuality or simply don't want to come out at all. But whether the stars have really come out or not - it is also simply nice to see so many people enjoying a green velvet couch.

Comments about Are Madonna, Emily Ratajkowski and Shay Mitchell celebrating their coming out with this new TikTok trend?