Bella Poarch, the pop star of the future comes from TikTok 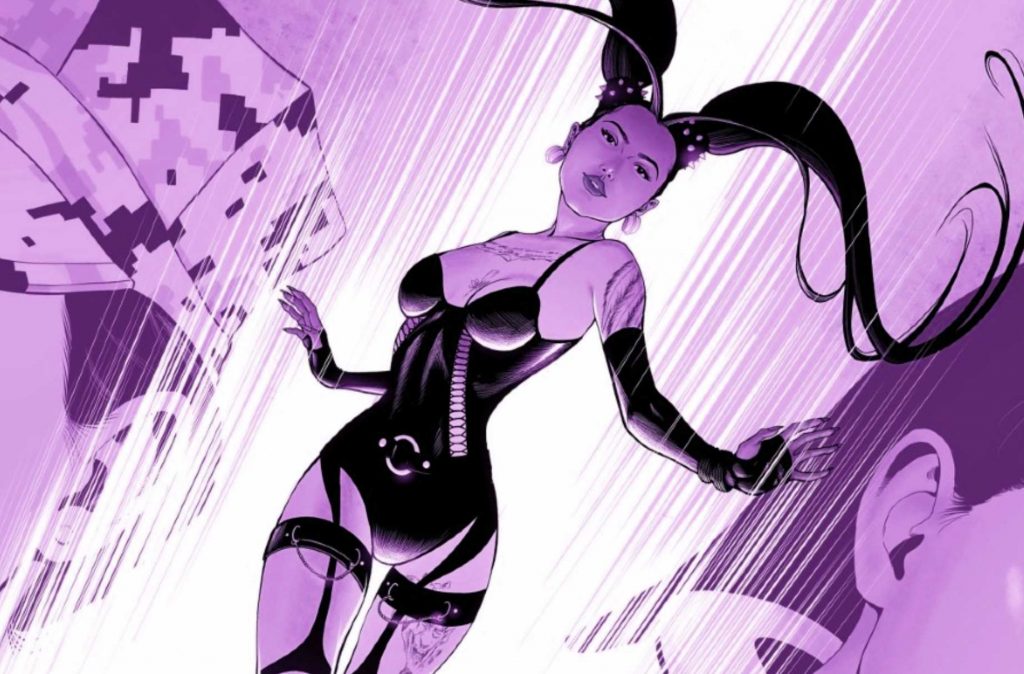 She put a difficult childhood behind her by enlisting in the Navy. She became a "viral" creator and now aims to conquer the music world. She has overcome the mistrust of record companies: will she now convince the public as well?

This morning Bella Poarch had a panic attack. It happened while she was tying her black hair in a high ponytail and arranging her makeup for our scheduled 9 a.m. appointment. At that point she wasn't so sure about leaving the house-she stays on the East Side of Los Angeles, where she lives with her cat PeePee and French bulldog PooPoo. In fact, she was sure she would stay there. Instead, here she is sitting on the couch across from me in a studio in Culver City, the 25-year-old former Navy serviceman who has become first a hyperviral creator-her lip-sync on a verse from Millie B's M to the B (Soph Aspin Send), released in August 2020, is still the most viewed TikTok content ever, with more than 56 million likes-and now an aspiring pop star.

Although on social media she is an ever-ready goth, in person she is shy. The discomfort her success causes her is palpable. However, as she has done all her life, she put aside anxiety and fear ("I thought: I can do this") to get where she wanted to be.

For social stars, the transition from anonymity to success is especially strange. One day you're playing the ukulele in your bedroom, caught on your phone camera (as Bella Poarch did), and the next day you have millions of followers (in his case, more than 88). Usually, the creator's job is often quite solitary, requiring no collaborators or autographs to sign to legions of screaming fans. When you become as famous as Bella Poarch, however, you happen to find yourself interacting with a lot of strangers.

"Meeting so many new people can be … too much," says Poarch in a boyish voice and shy manner. "That's the problem I'm facing now."

She was equally shy when she first met producer Sub Urban, another Warner house artist who exploded on TikTok. That time, she says, she "didn't talk at all," but somehow she overcame even that bout of nerves. Together, the two wrote Build a Bitch, her first single, which hit the charts worldwide and at No. 56 on Billboard's Hot 100. Within 24 hours of its debut in May, it was the most viewed video on YouTube, with 10 million views.

The success of Build a Bitch surprised everyone who considered Poarch nothing more than a pretty girl lip-syncing. She appeared confident, funny, dark, and quirky. The video had special effects worthy of a big movie and contained cameos by other creators such as Bretman Rock and Mia Khalifa. For every new fan won over, came a skeptic convinced that Poarch would never become a real artist.

"Why are you making music? You only know how to make faces," she says of the negative comments she read online. "They hated me because I decided to make music after I became famous on social media."

The criticism did not stop her. Bella Poarch is at work on her debut EP, due out this year, which will feature songs written with Sub Urban and new friend Grimes, who called her "super hardcore." For someone who went through a difficult childhood, experience in the military and then global success, her reaction to criticism is another example of her ability to overcome obstacles and overturn all odds.

TikTok is full of aspiring actors, dancers, and people sharing everything more. When Poarch started using it, in the midst of the summer-Covid of 2020, its content did not fall into any of these categories. In fact, they were incredibly simple. Taking advantage of the app's Face Zoom feature, she created minimal lip-sync videos filled with cartoony expressions taken from video games and anime (check out the smirk punctuating M to the B). Playing a character gave her comfort, an escape technique she perfected throughout her life.

Born in the Philippines, Bella Poarch lived with her grandmother until she was 3 years old. She was then adopted by a white American ex-serviceman and his Filipino wife. She thus ended up with two sisters and a brother, who were also adopted.

As she said on the H3 podcast last year, when she was 7 years old, life on the family farm began to get complicated. Poarch's father was hard on both her and her brother, the youngest in the family. They had to wake up at three or four in the morning for how to clean up animal droppings (the other sisters were exempt from doing so). They were often not allowed to take showers before going to school, so classmates bullied them. If the farm work did not meet their father's standards, he would forbid her to eat and sometimes beat her. Meanwhile, her mother kept quiet.

At school Poarch found a way to express himself. In secret from his parents, every month he participated in a talent show. And every month he won. "I have like 36 gold medals," he says proudly. All these wins came because of her version of Beyoncé's Listen, the song from the movie Dreamgirls, which is also the story of a girl breaking free from an oppressive husband. It is still her favorite song when she sings karaoke.

When she was 13, the family moved to the United States, to Fresno, California (not the sisters, who remained in the Philippines). There her father's abuse diminished, but at 17 she always left. She joined the Navy, like her brother a few years earlier. Oddly enough, she found freedom in Virginia, the site of her first training. True, she had to follow a certain discipline, but on her days off she could do all the fun things that were forbidden at home, like going to the mall or playing with make-up. "It was nice change," she recalls. "I discovered more about myself."

While at the aviation academy in Pensacola, Florida, Bella Poarch got her first tattoo, a small heart. Now she is full of tattoos, some of which have served to hide the scars of her childhood. Her favorite is on her back; it's two wings with a ship in the center, a tribute to her time as an Air Force armaments officer.

"I was the petite one," she recounts. "My job was to pick up big 35-pound machine guns, carry them on helicopters and do maintenance. They used to make fun of me because I was tiny, but that job helped me challenge my limits. It taught me that I could do whatever I wanted, that I could overcome a lot of obstacles."

After her discharge from the Army, Bella Poarch moved to Hawaii. In early 2020, she joined TikTok for the first time. A few months later, as her M to the B video began to go viral, she had already signed on with a management company looking for promising, nonwhite content creators. She moved to Los Angeles in the midst of viral success and then decided she wanted to give music a try. During meetings with labels many people laughed at her, says Aryan Mahyar, one of her managers. They stopped when she showed a video of her singing a song by Shiloh Dynasty, a lo-fi artist, and playing the ukulele. "That's how they started to believe in me," she says.

Before the release of Build a Bitch, however, Bella Poarch had to fight another battle. She had become one of many creators who wanted to move into music, such as Charlie D'Amelio, Addison Rae, and Bryce Hall. And they all struggled to find an audience outside the platform. "They were constantly saying tiktokers have no talent," Mahyar says. Poarch was ready to take on that challenge as well. "I think it encouraged her, she took it as an opportunity."

The two new songs she played me show that she took that challenge seriously. They are reminiscent of Melanie Martinez's style, cursed doll-core, full of eerie noises that counterbalance her gentle, sweet voice. She describes her sound as dark pop, while the lyrics are written to inspire her audience to fight back. Everything is a child of her journey to learn to accept and love herself. "Take Beyoncé, she sings to support others," Poarch says. "That's what I want to do, too."

Her friend Grimes says her music makes sense: "Bella is calm in the midst of chaos. Even though she's been through tremendous experiences, she's super optimism-oriented, she wants everyone to win."

The day after our meeting, Bella Poarch left for Austin to attend Grimes' birthday party. Other than that, the shy new pop star is all about singing, writing and meditation. On weekends her brother, who is now 28 and still in the Navy, joins her from San Diego. She has also rebuilt her relationship with her sisters, who live in the Philippines and are now in their 30s. "We were young, I don't blame them for anything," she says.

As for her adoptive parents, she last spoke with them a few years ago, just to explain how it was going. The father greeted her with "good luck" and little else. "That's when I realized I would never speak to them again. He wasn't interested in me." She has blocked the numbers for both of them and is good for now.

He is aiming for bigger goals. Music is the priority, but she would also like to star in a movie, perhaps as a Marvel superheroine. Her next video, which she shot after a few weeks of martial arts classes, could also work as the perfect audition. Not that she needs to impress anyone yet. As she says, "I'm here to prove myself right."

Comments about Bella Poarch, the pop star of the future comes from TikTok