Cardi B pleads guilty after 2018 brawl at Queens club 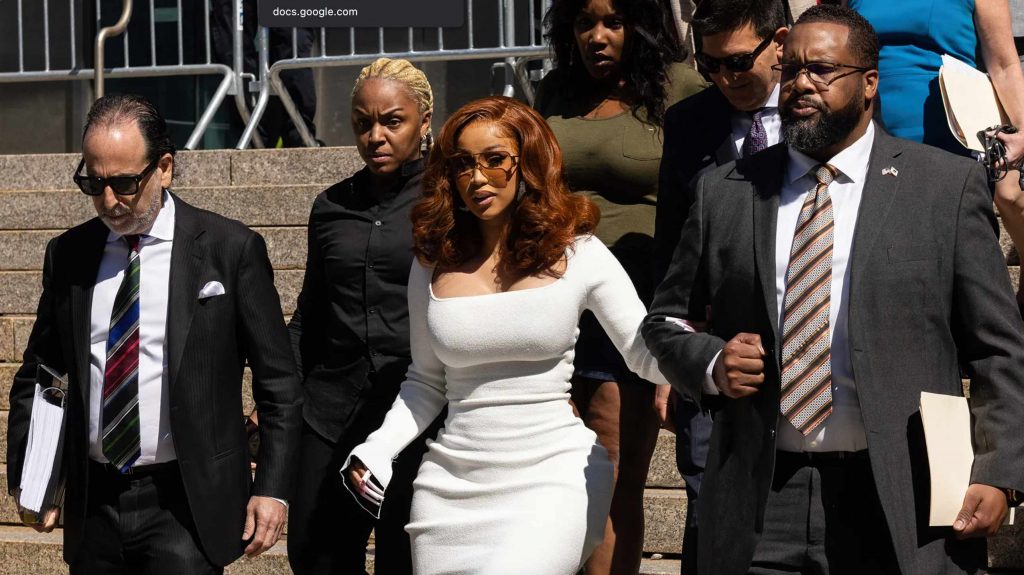 Rapper Cardi B has been sentenced to 15 days of community service after admitting her involvement in a lengthy court case involving events at a Queens club in 2018.

In October 2018, Cardi B had yet to release Bodak Yellow, the number one single that propelled her to international stardom, but her life was already fuelling all the tabloids. When she turned herself in to the police that month and was charged with two brawls at a Queens strip club, she was wearing a blonde wig and white blouse that later led The Cut to describe her as “looking like Marilyn Monroe”.

On Thursday 15 September, Cardi B continued her fashion show, wearing a white Proenza Schouler dress and matching Christian Louboutin shoes, to Queens Criminal Court. This time, she ended the court case. A guilty plea agreement was reached just before the start of a possible trial. The rapper and two co-defendants pleaded guilty to two felonies, admitting to attacking two female employees at the Angels Strip Club in Flushing. Cardi B allegedly accused one of the bartenders, two sisters, of having an affair with her husband, Offset.

As part of the deal, ten other related charges were dismissed. After pleading guilty to the offences of assault and reckless endangerment, Cardi B was sentenced to 15 days community service.

The proceedings in the courtroom were relatively calm. Cardi B admitted that she and her accomplices had smashed one victim’s head against a bar counter, thrown bottles at the second victim, and that in an Instagram post she had offered $5000 to one of the co-accused to join the brawl. Nevertheless, when she walked out of court with her lawyer Drew Findling -known for his work with Offset, or, more recently, Donald Trump-, a group of fans had gathered to cheer her warmly.

After the hearing, Findling explained why the singer pleaded guilty: “She planned too much for her family, for her career […],” he told reporters. And she just felt, quite honestly, that a three-week jury trial was going to be a distraction from those things that she feels are more important. So we made contact with the prosecution.”

“I’ve made some bad decisions in my past”

“Part of growing up and maturing is being responsible for your actions. As a mother, this is a practice I try to instill in my children, but the example starts with me,” Cardi B said in a statement. “I have made bad decisions in my past that I am not afraid to face and own,” she continued. Those moments do not define me or reflect who I am now. I look forward to moving past this with my family and friends and getting back to the things I love most – music and my fans.” She then posted a series of shots detailing her outfit on Twitter.