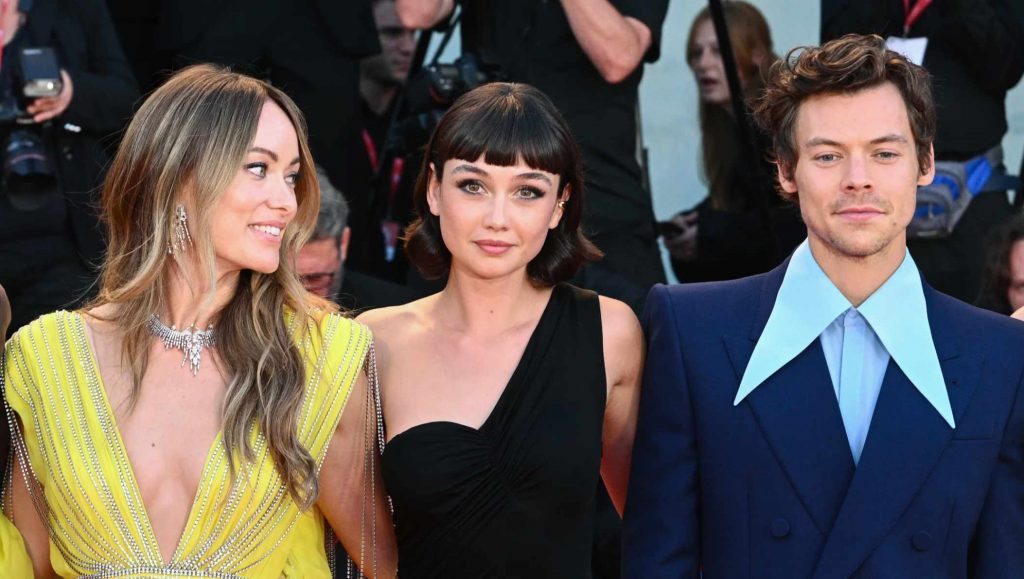 But did Harry Styles spit at Chris Pine or not? Did Olivia Wilde and Florence Pugh have a fight? And did Shia LaBoeuf leave the set of his own volition or was he fired? Rarely does a film excite us as much or more than its story, but this is the case with Don’t Worry Darling, which premiered at the Venice Film Festival and is now in Italian cinemas. We thought the psychodrama surrounding the film was over at the Lido, but instead the sequel has arrived. On his last Late Night Show, Stephen Colbert had as a guest Olivia Wilde, whom the host asked about all the rumours that accompanied the making and promotion of Don’t Worry Darling. And she did not back down and replied that: no, there was no spat, that relations with Florence Pugh are calm and that Shia LaBoeuf fired him but that he too realised at some point that it was better to leave.

Accustomed to buttoned-up interviews, armoured sets and official statements with zero degree of sincerity, we couldn’t believe our feeds when the storm broke. Small recap.

The love between Olivia and Harry

On the set of Don’t Worry Darling it seems that the liaison between him and Olivia Wilde, at the time still married to actor Jason Sudeikis, star of the series Ted Lasso, and with whom he has two children, Otis, 8, and Daisy, 5, began. Olivia denied it: it started later. But then Page Six published an article at the end of July in which she recounted a set marked by arguments and various tensions. Florence Pugh allegedly did not like witnessing the extramarital affair, with her husband visiting his wife on set with the children: she felt ‘uncomfortable’, uncomfortable with the situation. What’s more: the actress would have been irritated by the director’s constant absences, who was more focused on the love story than on the film. Rumours gathered by Page Six through an insider, the rest is official history: Olivia and Jason Sudeikis’ separation in November 2020 and him making her hand over the legal documents for the custody of the children just as she was on stage at CinemaCon in Las Vegas last April (on a scale of passive-aggressive behaviour, the gesture ranks very high).

The fight between Florence and Olivia

So Florence Pugh and Olivia had a fight? Internet detectives swear they did: the actress doesn’t like the director’s posts, and especially in July she didn’t even share the trailer for Don’t Worry Darling, a film all about her role and performance. As if that were not enough, Florence cancelled all promotional activity on the film. Official reason: she is busy on the set of Dune 2, in which she plays Princess Irulan. Which is the same justification that was given for the forfeit at the press conference for the presentation of Don’t Worry Darling in Venice: too many commitments, she didn’t make it from Hungary to Italy in time. She only arrived for the red carpet, didn’t say a word and at the evening premiere sat far away from the director. A case in point? Page Six asked a Hollywood publicist specialising in ‘crisis management’, image crisis management, who gave his verdict anonymously: ‘If Florence is avoiding the press, one has to wonder why. When she worked on Marvel productions, she did press work on a massive scale. It seems strange that she avoids journalists on this subject, unless she wants to avoid talking about…. Olivia’.

Another mystery about the film: the famous spit-gate. There is a video circulating in which it appears that, at the Venetian premiere, Harry Styles leans over and spits on fellow seat neighbour Chris Pine before sitting down. Was it spit or just a trickle of drool? Obviously, the Internet went crazy and dubbed the incident ‘spit-gate’. Even the publicists intervened to shut down the spit crisis and eventually Harry Styles joked about it.

Shia LaBoeuf and the dismissal

Last tide that nobody laughed about: Shia LaBoeuf’s dismissal from the set. So, how did it go? It is known that the actor had been hired to play Florence Pugh’s husband, but that the part then went to Harry Styles. Olivia Wilde had initially spoken of ‘inappropriate behaviour’, now on Colbert’s Late Night Show she explained that she tried, in vain, to mediate between him and Florence Pugh: ‘Once it became clear that it was not a sustainable working relationship, I was given an ultimatum. I chose my actress, and I am very happy I did. Was I sorry at the time that we couldn’t make it work? Of course. Did information about him later emerge that made me realise I had made the right decision? Absolutely. Shia LaBoeuf, who was also struggling with various problems such as the allegations of harassment and beatings by former FKA Twigs, had specified that no, he had left the set.

Is that the end of it? For the moment, it would seem so. In the meantime, Don’t Worry Darling, after a lukewarm critical reception, is in theatres and it is easy to see why it is one of the season’s top titles: a rich cast with a global music star, a dystopian and feminist story at the same time as the spirit of the times, the ingredients for box office success are all there. Whether the film will do well we will only find out as we live, certainly the most exciting show in Hollywood is served. We await the next chapter in the saga.