“You’re too loud, and you’re annoying”: how TikTok star Estefaniaelisa went from hate to stardom 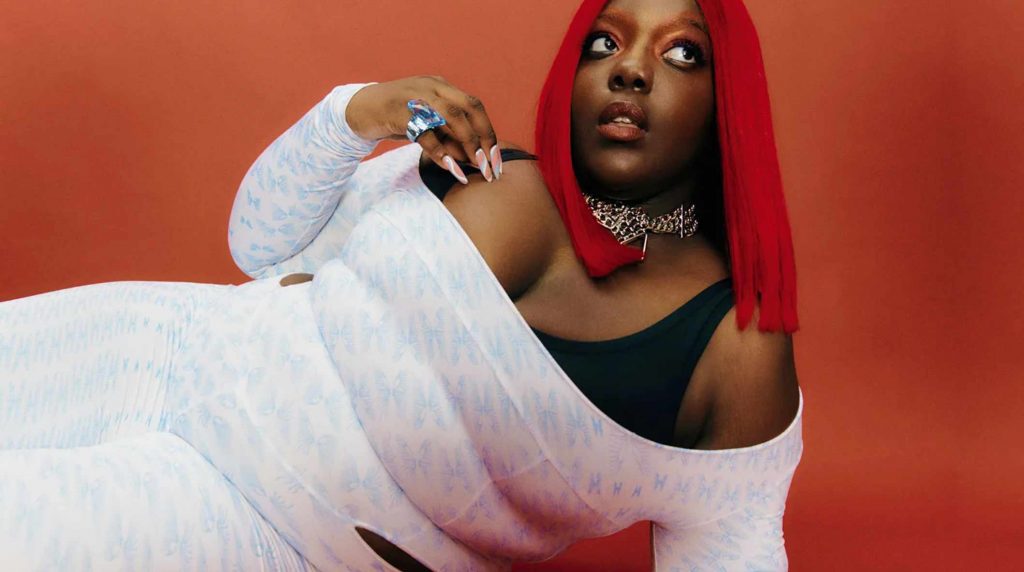 She is loud, she is present - and she conveys empowerment with a lot of humor. Estefaniaelisa is followed by millions on TikTok. But before her fame, the content creator had to fight exclusion. In the interview for her first cover shoot with GLAMOUR, the 19-year-old talks openly about the stress of high school graduation, everyday racism and late role models.

Just 19 and fresh out of school, Estefaniaelisa navigates a TikTok community with around 2.9 million followers. If you ask her how it all came about, she says, "all of a sudden it was like it took on a life of its own," over which she no longer had any control. And at the latest after she was recognized by people on the street, it was clear: "It's not a joke anymore!" So really surprising is not the attraction she exerts on her audience, because the multi-talent who grew up in the small town of Düren inspires people with humor, rap interludes, dances and an important message: namely that of self-love and acceptance. This is exactly what she communicates in funny sketches in which she doesn't take herself too seriously; she reminds us with the exclamation "ÄÄSTEEEE, ALSO WIRKLICH!" that although life is not always funny, we have it in our own hands how we take it. And Estefaniaelisa takes it with humor and optimism - that's how she meets her critics. To them, she simply turns the tables: "They expect you to be hurt and react that way. Instead, I use my resources differently and counter the hate with positive statements. That triggers, but that's exactly how they recognize that what they're doing is totally unnecessary."

Estefaniaelisa in the big interview

You belong to the so-called Bedroom Creators, a generation of artists:inside who start a career from the "nursery". Do you think that has influenced your content?

I think that's what defines me: Shooting videos in my room without giving it much thought. It reflects my nature and shows that you don't need much to reach people. It's what comes out of yourself and your charisma! If I would have started differently back then and been mega professional right away, I would also have a lot more pressure to get better and better today.

Speaking of pressure - you have an impressive success story: starting a TikTok career as an underdog from the small town of Düren and graduating from high school at the same time. How did you manage that?

To this day, I wonder how I pulled it off. Very often I considered just dropping out. In the beginning, I really enjoyed going to school because it was a fresh start for me - that's when TikTok was just a hobby. When it really took off in 2021, it became more and more difficult. It's a gnarly load: you have to deliver, produce content, entertain people, and graduate - it was multitasking.

But you didn't drop out, unlike many others….

For me personally, it was important because I wanted to prove it to myself - since so few people believed that I could graduate with a secondary school diploma. I already had two years behind me, why not go through with the last one? It was no walk in the park, but in the end it worked out!

That makes you a motivating role model for many people. Are you aware of this role?

Yes and no. It was important to me that my community understands that school is simply a certain stage of life - not forever. And sometimes you just have to grit your teeth: "What do you mean, you're not in the mood anymore? AASTEEEE, REALLY!" Of course, you often don't feel like it; there are so many things in life that you don't feel like doing. But sometimes you should also think about the future.

You are a real multi-talent. Is there anything you're not good at?

I always say I can't do anything blatantly well, but I can do a lot of things so mediocre. So I decided to combine my talents and, instead of just talking about confidence, rap about it. The raps were really well received, while I can't really rap at all. But I like to write because it calms me down, and in combination it worked great.

That's a pretty good tip. What was it like for you to make your first speaking video?

The reaction to it - getting that kind of positive feedback! - was a completely new experience for me. Otherwise, I've always been told, "You're too loud, too temperamental, and you're annoying." You eventually believe that. But then when you get completely different feedback, you suddenly have a completely different perspective on yourself. Then I just talked because it was so much fun - and more approachable.

I really struggled with Instagram. It's not my platform. On TikTok, people celebrate you for being authentic and showing different facets of your life. Instagram is not just about entertainment, it's about aesthetics. There's a lot of emphasis on everything being beautiful and perfect - attractive to viewers. That just wasn't the right thing for me.

You live in a small town. How does that fit in with your Internet lifestyle - do you sometimes feel out of place there?

You feel lost! Especially because there aren't many black people there. Of course, being a loud person who shoots videos makes you stand out. For me it wasn't really a problem, but some people certainly thought: What is she doing there? Typical village. Everyone is quieter, and the mindset is just different. But somewhere I do feel the village life. This is where I grew up, and this is where I started doing what I love. That connects. And this is a good place for me to come to rest.

I had a very nice kindergarten time and even then I was a "baddie", very present, I acted out creatively. But it's crazy to look back and see how you've changed at some point.

Changed in what way?

Depending on what my environment was like, my character changed. Of course, subconsciously I've always been this present personality, but it's rad how you can suppress that - depending on your experiences and how you're accepted by the people around you. And sometimes they don't accept you at all.

A lot of Black people develop strategies over the years for dealing with everyday racism. Is that what you mean by being oppressed?

I was teased in school. Keeping a low profile and not showing your character is self-protection. I stand out just because of the color of my skin, and if I had been loud, direct, and present on top of that, it would have made me even more vulnerable. That's why the most sensible thing for me to do was to keep a low profile, so that people wouldn't constantly make me understand that there was something wrong with me. When you're a kid, you're lost, you look for all the faults in yourself and you think: what's wrong with me? Racism hits you directly because you are excluded, and that being excluded is much worse than stupid comments. In that moment you are alone, and that has so many negative consequences that can create trauma. So it's important to address that as early as possible: Children are not stupid, they can learn and understand.

That means behind the humor of your content there is also quite a bit of activism?

My message is close to my heart, and in life not everything is always funny - people have to check that. I empower them loudly, with temperament, humor, courage and raps, and translate complex topics like body shaming into easy-to-understand content. Of course, I could also stand in front of the camera and dryly rattle off that everyone should love themselves - "yeah, okay, Este, that's what my mom tells me" - but it won't go down that way.

You spoke in a podcast about "the addiction to compare yourself." Have you kicked that or rather learned to deal with it?

Both. It depends on how I compare myself to other creators. Outwardly: zero. I look more at what they're doing and how far they've come. But then I quickly realize: we're different people, we have different lifestyles and a different community.

What is it like for you as a BIPoC in the German Creator: innen bubble?

I think there are too few black creators. But within the bubble we follow each other and celebrate each other.

Do you feel like you have to "do" more as a Black Creator than others?

I don't know if I have to or if I just want to - because I wish that Black Creator:ins are more present. Sure, we live in Germany, and obviously there are more white Creator:ins because we live in a white country. But we also live in a time where everything is diverse and everyone is becoming more open. So it's important for me to be visible so that Black people feel empowered!

Who are your role models?

For a very long time I was my own role model, but now there are female artists like Cardi B and Meghan Thee Stallion. Both of them are Black women, and I recognize myself in them: they are loud, Black, have a crazy style, and represent a new body image! To me, these are women who have so much power and change the entire game. The reason I never had an idol was because no one fit me and there was no one I could relate to. Now that there are these artists:inside, I'm experiencing for the first time what it's like to have someone who inspires you. And that's a great feeling!

Comments about “You’re too loud, and you’re annoying”: how TikTok star Estefaniaelisa went from hate to stardom